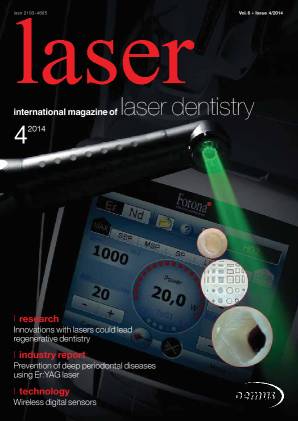 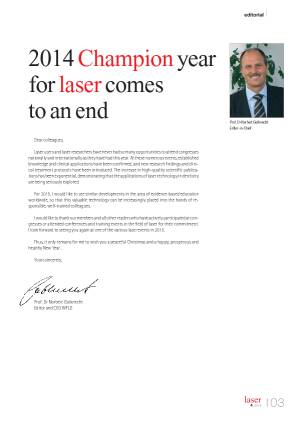 Editorial: 2014 Champion year for laser comes to an end

Laser users and laser researchers have never had so many opportunities to attend congresses nationally and internationally as they have had this year. At these numerous events, established knowledge and clinical applications have been confirmed, and new research findings and clinical treatment protocols have been introduced. The increase in high-quality scientific publications has been exponential, demonstrating that the applications of laser technology in dentistry are being seriously explored... 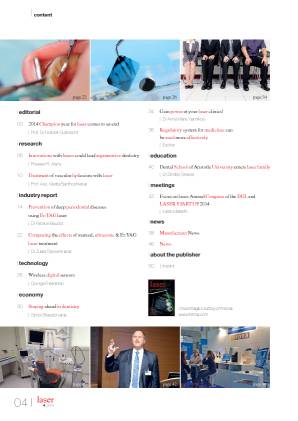 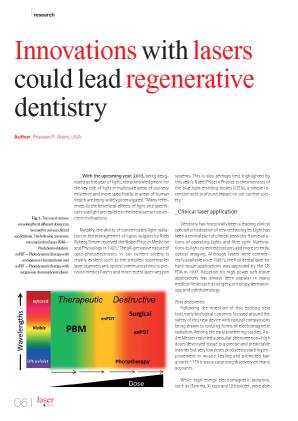 With the upcoming year, 2015, being designated as the year of light, the acknowledgment for the key role of light in multitude areas of our very existence and more specifically, in areas of human health are being widely promulgated.1 Many references to the beneficial effects of light and specifically sunlight are replete in the literature across ancient civilisations... 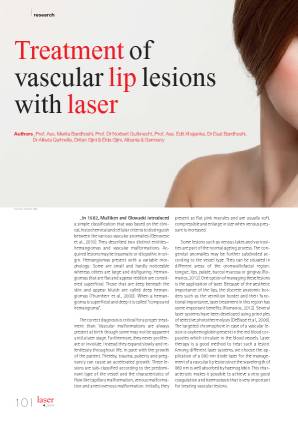 In 1982, Mulliken and Glowacki introduced a simple classification that was based on the clinical, histochemical and cellular criteria to distinguish between the various vascular anomalies (Genovese et al., 2010). They described two distinct entities— hemangiomas and vascular malformations. Acquired lesions may be traumatic or idiopathic in origin. Hemangiomas present with a variable morphology: Some are small and hardly noticeable whereas others are large and disfiguring. Hemangiomas that are flat and appear reddish are considered superficial. Those that are deep beneath the skin and appear bluish are called deep hemangiomas (Thurnherr et al., 2000). When a hemangioma is superficial and deep it is called “compound hemangioma”...

Periodontal maintenance is an integral part of successful periodontal therapy (Axelsson & Lindhe, 1981).The objective is to stabilise the microbial balance restored after an initial periodontal therapy (Kornman, 1997). A systematic surgical approach following an initial therapy is no longer necessary as it is with standard treatment (Heitz-Mayfield, 2005). Over the past few years, periodontics has been shifting towards a non-invasive or non-surgical approach to access the deep cleaning of the periodontium, as part of the development of all medical surgical techniques in general... 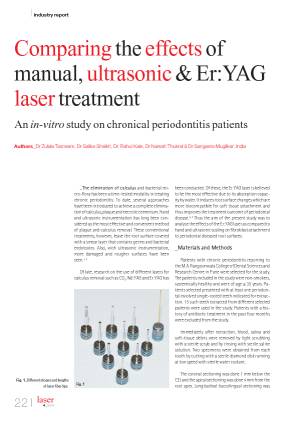 The elimination of calculus and bacterial micro-flora has been a time-tested modality in treating chronic periodontitis. To date, several approaches have been introduced to achieve a complete elimination of calculus, plaque and necrotic cementum. Hand and ultrasonic instrumentation has long been considered as the most effective and convenient method of plaque and calculus removal. These conventional treatments, however, leave the root surface covered with a smear layer that contains germs and bacterial endotoxins. Also, with ultrasonic instrumentation, more damaged and rougher surfaces have been seen.1, 2...

When digital dental radiography was first introduced in the late 1980s, conventional X-rays had been in use for almost a century. The radiograph had, over the years, expanded the dentist’s investigative capacity in many ways; it was possible to confirm health, or to detect disease, in many previously invisible areas of concern to the profession, including coronally, pariapically, and periodontally. Visual access, complemented by radiographic interpretation, provided a comprehensive environment for earlier and more accurate diagnosis...

Staying ahead in dentistry - Pleading for language competency and communication skills 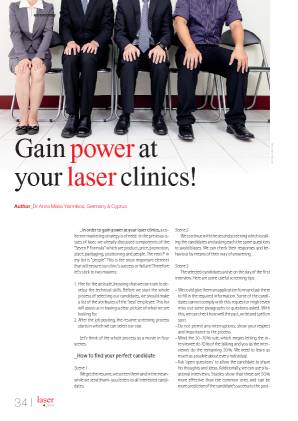 Gain power at your laser clinics!

In order to gain power at your laser clinics, a coherent marketing strategy is of need. In the previous issues of laser, we already discussed components of the “Seven P Formula” which are product, price, promotion, place, packaging, positioning and people. The next P in my list is “people”. This is the most important element that will ensure our clinic’s success or failure! Therefore let’s stick to two maxims: ... 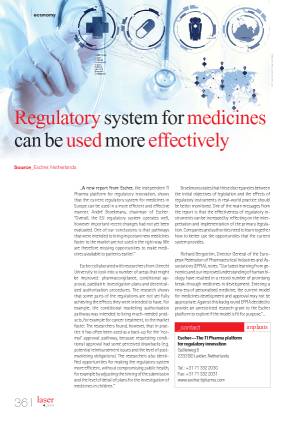 Regulatory system for medicines can be used more effectively

A new report from Escher, the independent TI Pharma platform for regulatory innovation, shows that the current regulatory system for medicines in Europe can be used in a more efficient and effective manner. André Broekmans, chairman of Escher: “Overall, the EU regulatory system operates well, however important recent changes had not yet been evaluated. One of our conclusions is that pathways that were intended to bring important new medicines faster to the market are not used in the right way. We are therefore missing opportunities to make medicines available to patients earlier.”... 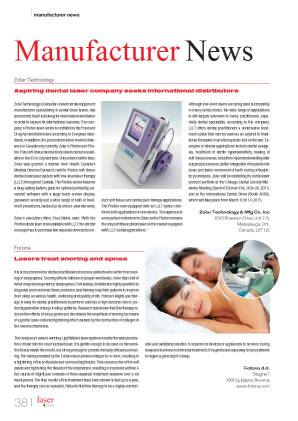 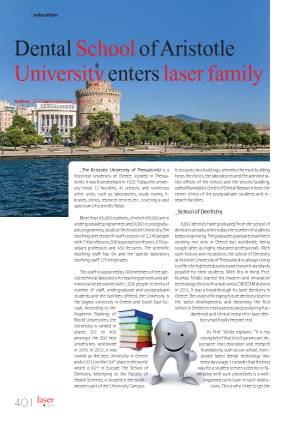 The Aristotle University of Thessaloniki is a historical university of Greece, located in Thessaloniki. It was founded back in 1925. Today, the university hosts 12 faculties, 41 schools, and numerous other units, such as laboratories, study rooms, libraries, clinics, research centres etc., covering a vast spectrum of scientific fields... 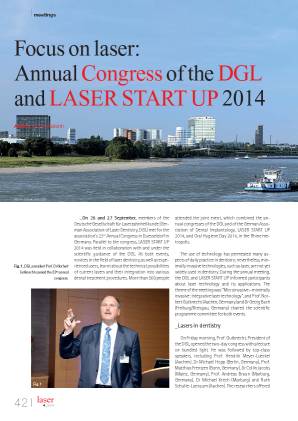 Focus on laser: Annual Congress of the DGL and LASER START UP 2014

On 26 and 27 September, members of the Deutsche Gesellschaft für Laserzahnheilkunde (German Association of Laser Dentistry, DGL) met for the association’s 23rd Annual Congress in Duesseldorf in Germany. Parallel to the congress, LASER START UP 2014 was held in collaboration with and under the scientific guidance of the DGL. At both events, novices in the field of laser dentistry, as well as experienced users, learnt about the technical possibilities of current lasers and their integration into various dental treatment procedures. More than 500 people attended the joint event, which combined the annual congresses of the DGL and of the German Association of Dental Implantology, LASER START UP 2014, and Oral Hygiene Day 2014, in the Rhine metropolis. 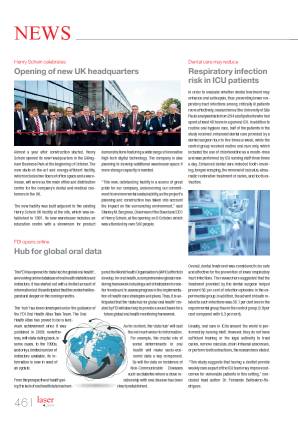 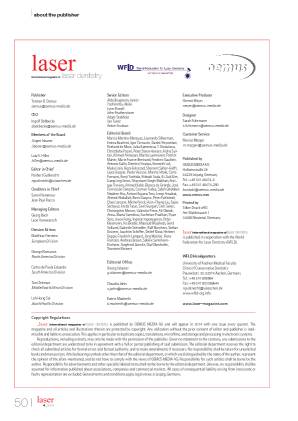 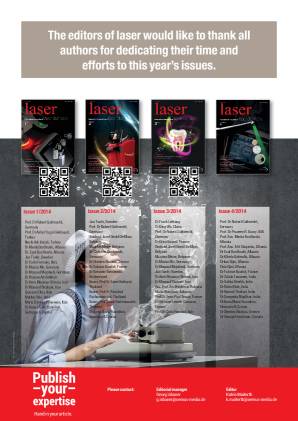 The editors of laser would like to thank all authors for dedicating their time and efforts to this year’s issues.